Car repairs and servicing at your place for same cost – Why wouldn’t you?

The man in the van

We are a family business. What sets Triple C Mobile Mechanix apart is we care. We care for your car and we invest time into getting to know you and what you want 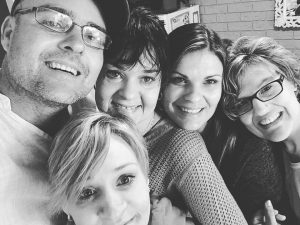 Me and my siblings

I grew up in in a country town. In a small country town -the kind where if you try and rip someone off, the whole town hears about it really quickly, so you learn to be upfront and not to treat people like idiots.

2. How long have you been a mechanic?

I left year 12 and started a Pre-apprenticeship Course in Welding and Automotive Mechanics. I got 4 job offers for welding in the first month, but I didn’t have the passion for it -good skill to have though. The second year I was apprenticed to my uncle, who was an incredible mechanic. I secretly complained about the amount of times I had to work for no overtime and no super, but it paid off when at the end of my apprenticeship I was awarded “Highest Pass’ in the state. Overall I won about 14 awards with several trips and over $5000 worth of cash and prizes! I had a break from mechanics, as I wanted to help people. I become a youth worker, and then completed a post grad degree in Theology. My specialities were pastoral care (families and young people), education and teaching. I’m a strong but collaborative leader. After a time I moved on and started a small IT business which I still run today, but then I went back to my first love -fixing cars.

3. What made you want to become one? Were you the kind of kid that took things apart?

Mum and Dad constantly complained about the things I took apart (that rarely got put back together!). If there was a button somewhere, I’d push it, and my 2 favourite ‘Child Craft’ books were ‘Fables and Myths’ and ‘How Things Work’. Being mechanically minded was in the family. My grandfather built the first arc welder in the district from scratch and my father and uncle actually built a truck from the ground up -it served them well for 650,000 klms!

That’s an easy one. One guy wanted me to get his Mercedes started. When I got there, it had a couple of doors and the steering wheel removed. He said that as the import duty was too high, he was sending it back home in bits! He bragged that he had bought a $200,000 vehicle for $16,000 at the auctions. I discovered after a while that the car had been up to the windows in water, and the engine was seized. He said, “I’ll pay you $90 if you get it started”. I thought, “No, you would have to pay me $8000 to start that!”

5. What’s the most common problem you come across?

The way that dealers lead people to believe that “Geniune is Best”. Dealers are overpriced. Car manufacturers don’t make car parts, they buy them from factories like I do. Recently the AAAA (the peak body for Aftermarket Automotive repair) announced that the “Geniune is best” mantra is at best a marketing tool (and a very effective one at that).

I’ve been in the industry long enough to know that fixed price servicing means one thing -get your car in and out of the workshop as quick as possible- as they will get paid the same! $150 services simply don’t look after your car. Brakes, gearboxes, suspension, steering, fuel, cooling and electrical systems all need attention. You really need to budget about $1000 per year to maintain a car properly (some years it will be less, some years it will be more). Even the ‘run around’ won’t run around for long if you don’t look after it.

6. Have you always wanted to be a mechanic?

I like helping people. It doesn’t matter in what capacity (in fact I still have people that engage me in a counselling role). But as for mechanics, I love the fact that there are over 1000 different cars on the road now because I do a good job in looking after them. There is nothing more satisfying than fixing a car for a price that the customer is happy with. It doesn’t always happen -cars and car parts are expensive, but my low hourly rate ensures that I can do this most of the time.

7. How did Josiah end up working with you?

Josiah was one of my year 10 Work Experience guys (bring back Work Experience I say!). He was really really good! I knew that he planned to be an engineer, but I was happy to give him ‘real world experience’, as I have known engineers that don’t realise you can’t screw something to air :). But by the time he was in year 12 (he was School Captain), he realised that fixing things made him happy and he asked me to consider putting him on. I thought it was time to pass on my knowledge to the next generation, so I did. Now we are a great team.

8. What hobbies do you have away from cars? Dreams?

I love bush walking, mountain climbing, music, bike riding and helping people.
My dream – My dream is to help facilitate the building of a Eco Village on the Northside of Brisbane. I believe modern suburban life is impoverished, and a vibrant community of people sharing a semi rural space, expenses and lives may well prove to be the preferred way to live in the future!

Sometimes problems come along with cars, and they are just tricky to diagnose. I lose sleep over these. I think about what it could be, and research. I really enjoy that part of things, solving problems. I think it’s the care that makes Triple C different.

Everything you need to know about Triple C Mobile Mechanix